The Fundación Tierra Austral collaborated with The PEW Charitable Trusts to host a webinar called “The Derecho Real de Conservación as an Iinstrument for PrivateLland Conservation. Presenters at the webinar included Victoria Alonso, the Executive Director of Tierra Austral, Franco Acchiardo, a Partner at the Grasty Quintana Majlis Law Firm and Henry Tepper, FTA’s Strategic Conservation Advisor, who is also an Instructor in the Sustainability Program at the Harvard University Extension School and Brandeis University.

Several members of Tierra Austral’s staff participated in the Land Trust Alliance Rally, an event organized annually by the Land Trust Alliance, the national service organization for private, non-profit land conservation organizations in the United States. This year, because of the COVID-19 pandemic, the three-day Rally was held virtually. FTA’s Strategic Conservation Advisor Henry Tepper joined several colleagues from the International and European Conservation Networks and the Australian Land Conservation Alliance to make a presentation called “Private Land Conservation Around the World: New Opportunities to Teach and Learn.”

In connection to the publication described above, Tierra Austral and ASÍ Conserva Chile hosted a series of 6 webinars to present the best practices for private lands conservation in Chile. The workshops covered a comprehensive range of topics, including land trust governance and the use of the Derecho Real de Conservación. These workshops were also well-attended, and the FTA team answered the many questions asked by the attendees.

Tierra Austral and ASí Conserva Chile have released an important new publication, “Standards for Private Land Conservation in Chile.” The publication, which was made possible by a grant from the Innova CORO Project, provides detailed and practical information on both the operation of NGO land conservation groups and on all facets of the practice of the Derecho Real de Conservación. Staff from FTA and ASÍ Conserva Chile spoke about the publication at an online workshop that was attended by more than 350 people, including landowners, non-profit organizations, practitioners, and other entities involved in private lands conservation. 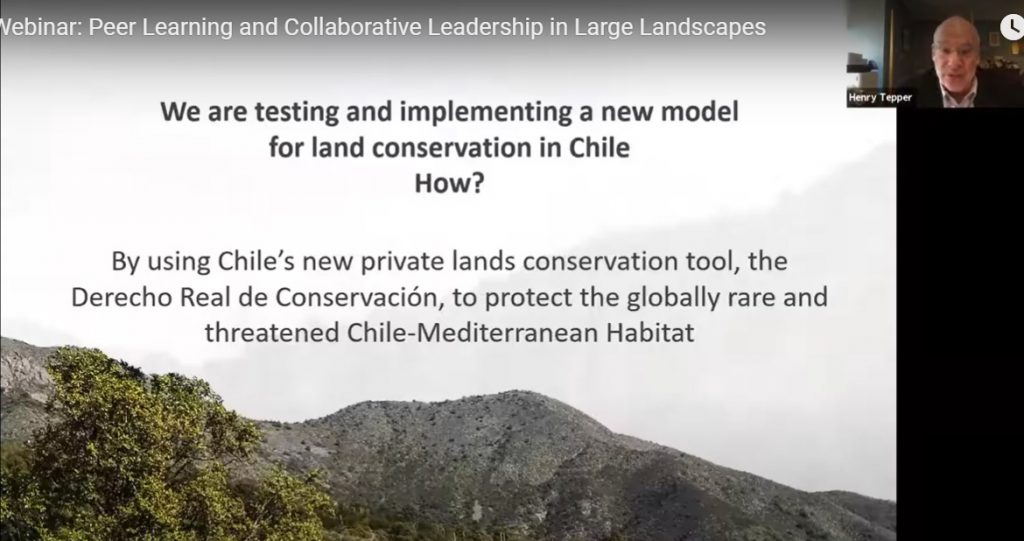 Fundación Tierra Austral presented its El Boldo to Cantillana project at the International Land Conservation Network Congress (ILCN), organized by the Lincoln Institute of Land Policy. Other members of the Peer Large Landscape Learning Exchange also presented at the webinar, which was organized as a temporary replacement for the in-person Third Annual ILCN Congress.

Participation in the annual meeting organized by the BHP Foundation

Fundación Tierra Austral participated in the Online Annual Partners Workshop organized by the BHP Foundation. The workshop was originally scheduled as an in-person meeting to be held in the Amazonian forest in Peru, but, because of the COVID-19 Pandemic, it was rescheduled as three online workshops.

Participation in the annual meeting organized by ALCA

Fundación Tierra Austral participated in the Annual Meeting organized by the Australian Land Conservation Alliance (ALCA), held in Adelaide, Australia. Tierra Austral Board member and consultant Henry Tepper discussed the Boldo-Cantillana project as part of a panel on the BHP Foundation’s Environmental Resilience Program, and he also spoke at an all-day Conservation Finance Workshop.

Participation in the Chile-California Exchange Program

For the third year in a row, Fundación Tierra Austral helped plan and made a presentation at the Annual Meeting of the Chile-California Exchange Program, which was held in October, 2019, in Point Reyes, California, United States. FTA’s Executive Director Diego Tabilo presented the Boldo-Cantillana project at the meeting.

Participation in the Large Landscape Peer Learning Exchange, organized by the Lincoln Institute for Land Policy

In 2018 and 2019, Tierra Austral participated in a series of meetings of the first Large Landscape Peer Exchange, which has been organized by the Lincoln Institute for Land Policy. In September of 2019, in Woodstock, Vermont, United States, FTA Executive President Victoria Alonso and Board member Henry Tepper made a presentation on the Boldo-Cantillana project at the third and last meeting of the Peer Exchange. Other participants in the Exchange included the leaders of the Appalachian Trail and Conservancy (Eastern USA), Golden Gate Park (San Francisco, USA) and the Ruta de los Parques (Patagonia, Chile).

Execution of cooperation agreement with the Pro Bono Foundation

Workshop on Standards of the Derecho Real de Conservación

Within the framework of the project Establecimiento de Estándares para Iniciativas de Conservación Privada (ICP), Land Trusts y uso del Derecho Real de Conservación (DRC) en Chile, a participatory workshop on the DRC was held, in which the standards proposed where analyzed and the principles and indicators of the law were discussed.

Within the framework of the project Establecimiento de Estándares para Iniciativas de Conservación Privada (ICP), Land Trusts y uso del Derecho Real de Conservación (DRC) en Chile, a presentation on Land Trusts and their function both in Chile and abroad was made. Fundación Tierra Austral took the opportunity to give a presentation, as co-implementer of the CORFO Project and also as current Land Trust in Chile. Additionally, group work was performed in order to analyze and discuss the proposed standards.

Fundación Tierra Austral participated and was fully engaged in the planning of the second Global Congress of the International Land Conservation Network: “From Communities to Countries: Visionary Conservation in a Changing World”, held in Santiago in January of 2018. The Congress was particularly exciting for Tierra Austral, because it showcased the globally influential leadership of the Chilean private lands conservation initiative and FTA’s leadership role in this effort. In particular, Tierra Austral had a chance to raise awareness of the Derecho Real de Conservación among conservation professionals from around the world, and in particular from countries that use Civil Law.

Representatives of Fundación Tierra Austral participated in a well-received panel presentation at the national meeting of the Land Trust Alliance in Denver, Colorado, United States. Joining FTA on the panel were several of our closest friends and colleagues, leaders of the long, complex and ultimately successful effort to pass the Derecho Real de Conservación in the Chilean Congress in 2016. The panelists included: Michael Grasty, of the law firm Grasty, Quintana & Majlis, and now the Chair of FTA’s Board of Directors; Roberto Peralta, of the law firm Peralta, Gutiérrez & Asociados, and now a member of FTA’s Board; Victoria Alonso, then the Chair of FTA’s Board and now its Executive Director; FTA Board member and consultant Henry Tepper, Fundación Tierra Austral; Francisco Solís, the Executive Director of the Pew Charitable Trusts program in Chile; and Jim Levitt of the Lincoln Institute for Land Policy and the International Land Conservation Network, who served as Moderator.

Forum for lawyers and representatives of the private sector

Fundación Tierra Austral participated in an event organized by the Pro Bono Foundation. The Foundation invited Tierra Austral to give a lecture at a forum on the “benefits and challenges of the Derecho Real de Conservación”. The presenters were Michael Grasty and Franco Acchiardo, of the law firm Grasty, Quintana & Majlis, engaged in private conservation in Chile for some time now. Henry Tepper, member of the board of Tierra Austral, Martijn Wilder, partner of the law firm Baker & McKenzie Australia, and Carolina Contreras, Executive Director of the Pro Bono Foundation, were also presenters.

Law 20,930, creating the new Derecho Real de Conservación, was enacted by the Government of Chile, upon the unanimous consent of the Congress. The new law, which has been the focus of an eight-year effort by conservation efforts, is widely viewed as a breakthrough for private lands conservation in Chile and beyond.

The Senate of Chile adopts, in general, the Derecho Real de Conservación

On May 7th, 2014, by 29 votes in favor, no dissenting votes and no abstentions, the Senate passed private lands conservation enabling legislation, the Derecho Real de Conservación. The next step in the Chilean Congress’s consideration of this law will be an analysis by the Joint Commissions (Congressional Committees) on Constitution and Environment.

The Executive Director of Fundación Tierra Austral Gabriela Franco and board member David Tecklin were invited by the Sonoma Land Trust, a prominent land trust in California in the United States, to learn about its private conservation projects and strategies in the Mediterranean climate of California. Gabriela and David had the opportunity to learn about the Sonoma Land Trust, to visit some of the properties that it has conserved, and to tell the land trust’s leadership about the work of Tierra Austral. While in the US, Gabriela and David also participated in a statewide conference of California land trusts.